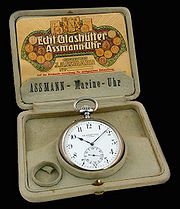 This exceptional timepiece, handmade in the firm’s manufactory and limited to 25 pieces, pays homage to the pioneering spirit of two extraordinary men, Julius Assmann and Roald Amundsen.

Julius Assmann started his company at the age of 25 and is revered today as one of the founding fathers of watchmaking in Glashütte. Pocket watches, chronometers and observation watches crafted by Assmann and his employees were to play a significant role in establishing the company’s far-reaching reputation: the observation watches in particular were known for their remarkable precision and superior craftsmanship.

Before setting out on his historic voyage, Roald Amundsen acquired a number of Assmann observation watches, including one crafted by the young Glashütte watchmaker Paul Löwe in 1907/08. Löwe’s watch proved to be exceptionally precise, and he was urged to send it for testing to the German Naval Observatory in Hamburg, the institute officially responsible for testing and certifying the accuracy of navigational timekeepers made in Germany. It was there that Roald Amundsen saw the watch, and he purchased it in 1910.

On December 14th, 1911, the Norwegian polar explorer and his team became the first persons ever to reach the geographic South Pole.

Observation watches, also known as “deck watches” were used by navigation officers in conjunction with marine chronometers and other instruments to determine as precisely as possible a ship’s position at sea, and Amundsen will have made good use of his observation watches during his voyage to Antarctica on the polar ship, Fram.

Once he and his team set out from their base camp at Framheim on the Bay of Whales, however, the time kept by his observation watches became the only standard: one watch was set to a home time and assumed the function of the marine chronometer on a ship; a second watch was set to local time; measurement of the difference between the two was used to calculate, using spherical trigonometry, the team’s position during the trek to the South Pole; a compass and sextant were also used.

Thus, Amundsen’s observation watches were absolutely critical to his mission: without them, he could never have reached his destination, much less claimed victory for Norway. In Oslo today, the Fram Museum displays, along with many other artifacts documenting the historic trek, one of Amundsen’s Glashütte observation watches, complete with the inscription “J. Assmann – Glashütte” on the dial.

Observation watches continued to be manufactured in Glashütte until 1971, a testament to the ongoing production of high quality timepieces even during challenging times.

The Senator Observer Limited Edition 1911 - Julius Assmann features a cylindrical case fashioned in white gold, complemented by a brown calfskin strap evocative of the age of pioneering adventurers and explorers epitomized by Amundsen.

The case back, engraved with the limited edition number (01/25), frames an antireflective sapphire crystal bearing the dates of Amundsen’s arrival at the South Pole and its centennial anniversary: 14 Dec. 1911 – 14 Dec 2011; the name Julius Assmann – Glashütte i/SA, and “Tribute to R. Amundsen”.

At the heart of the Senator Observer 1911 - Julius Assmann is the automatic caliber 100-14, an exquisitely finished self-winding movement. Traditional observation watches used hand-wound movements; Glashuette Original has chosen to outfit the Senator Observer 1911 - Julius Assmann with a contemporary automatic movement from our manufactory to maximize comfort for the wearer. Thus, the ‘Ab Auf’ indicator on the dial represents a true power reserve, rather than a simple indication of running time.

A bi-directional winding rotor delivers energy to a patented, stepped reduction gear, and then to two smaller, serially operating spring barrels. Large amounts of energy are transmitted to the mainspring, and the spring barrel is filled quickly.

Visible through the sapphire case back, the Caliber 100-14 is a fitting tribute to Julius Assmann. The movement features the characteristic Glashütte three-quarter plate, screw-mounted gold chatons, and a rotor with 21-carat gold oscillating weight and the gold-plated double-G mark that distinguishes high end mechanical watches from Glashütte Original.