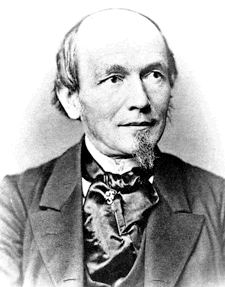 Ferdinand Adolph Lange (1815-1875), founder of the watch-and-clock-making industry in Glashütte

A. Lange & Söhne, quite likely the most distinguished name in German precision watchmaking, swept back onto the stage of time in 1994. This revival ended the involuntary disappearance of superb mechanical watches from Saxony that had lasted 50 years – and launched a modern success story. Today, as once before, the products crafted by the traditional workshops in the Ore Mountains rank among the world’s most coveted watches. A legend had risen from the ashes.

The foundation of the watch-and-clock-making industry in Glashütte by F. A. Lange

The dry up of the silver mining at Glashütte caused the danger of complete depletion. The inhabitants turned to the Saxonian state government with the urgent request for support. When Ferdinand Adolph Lange creates the first jobs Glashütte with the help of a state loan on 7 December 1845, starting a clock company with 15 apprentices, hope buds to be able to create further jobs in the new branch of occupation of the clock manufacturing. Lange begins to realise his project in the mansarde of a house in Glashütte.[1] Together with his brother-in-law, the master watchmaker Adolf Schneider and the 15 apprentices the long production of precision watches from Glashütte begins. Short time afterwards the first watch with the dial label "A. Lange, Dresden" leaves the workshop.