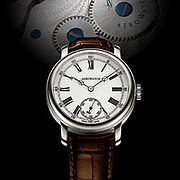 AEROWATCH SA is an independent family-owned company that has been producing famous high-quality timepieces since 1910. Located at the heart of the Jura mountain region, the firm based in Saignelégier is equipped with a modern workshop producing a wide range of pocket-watches and pendants.

In 2004, the company headed by Denis Bolzli and his two sons decided to diversify the collection by creating a range of wristwatches for the first time in its history. This transition has been undertaken by remaining faithful to the classic lines of vintage models, while equipping the new wristwatches with renowned mechanical hand-wound and self-winding movements. Each watch is assembled and then tested in our workshops, according to extremely demanding criteria. All our movements are composed of sets of parts crafted to chronometer-precision standards. They are meticulously decorated and embellished with blued screws.

The concern to bring these fine mechanisms within everyone’s reach at extremely competitive prices enables AEROWATCH to stand out from many competing brands. For AEROWATCH, details are an integral part of its conception of modern horology, and an effective means of conveying a timeless and intensely individual style.

Although time is generally believed to be universally identical as a measurement, it is in fact a highly subjective element in our lives. The way we use it makes each of us unique. It is based on this philosophy that AEROWATCH has committed itself to crafting the famous timepieces on which it has built its reputation.

Founded in 1910 in La Chaux-de-Fonds, the family business survived the hardships of World War I and moved to Fleurier several years later, before being transferred to Neuchâtel in May 1935. In 1942, Maxime Crevoisier took over the watch factory and settled in new premises in Neuchâtel. From then on, the company became specialists in the making of pocket-watches and pendants. In 1959, Georges Crevoisier succeeded his father and developed a distribution network in over 30 countries. Thanks to the reliable contacts established and cultivated with its clients, the company achieved international renown.

After 46 years at the head of the firm, Georges Crevoisier took a well-deserved retirement and handed over AEROWATCH to Denis Bolzli in 2001. In 2005, the company now based in Le Noirmont can rely on the managerial leadership of Denis Bolzli’s descendant Adeline, Fred-Eric and Jean-Sébastien. The brand is presenting a first collection of wristwatches inspired by vintage pocket-watches honouring horological tradition and also looks forward to presenting certain new introductions in the future.

In 2008, after seven years in le Noirmont, AEROWATCH SA moves their activities to Saignelégier, in a large luxury house dated 1896. The purchase of these new premises marks an important turning point in the history of the company by offering an exceptional working environment. Thanks to this enterprising family spirit, hand-crafted watch making traditions are perpetuated and enriched by a resolutely dynamic approach that is firmly geared towards the future.