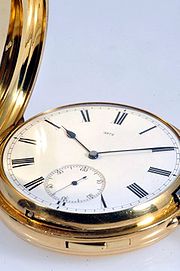 The Army & Navy Cooperative Society Limited was founded in London in 1871 and was the first and by far the most successful cooperative retailer throughout the whole of the British Empire and India. The company's goal was to provide "The Very Best English Goods" at reasonable prices. The Kew Observatory records list them as makers of high-quality complicated watches which were very successful during tests at the turn of the century. [1]

The store began as a co-operative society, The Army & Navy Co-operative Society, formed in 1871 by a group of army and navy officers. The intention was to supply 'articles of domestic consumption and general use to its members at the lowest remunerative rates'. The store opened on its present site on 15 February 1872 for the sale of groceries and expanded to include goods as diverse as drapery, drugs, fancy goods and guns.[2]