Stars of the tour – the three complications in the "165 Years – Homage to F. A. Lange" collection. 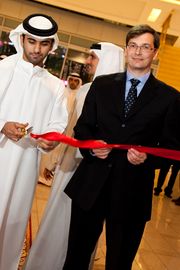 To showcase its outstanding past and present timepieces in the brand's anniversary year to its worldwide following of watch enthusiasts, A. Lange & Söhne embarked on a “Homage Tour” this autumn lasting several weeks with eight destinations around the globe.

With a special collection of three outstanding complications, A. Lange & Söhne pays tribute this year to the intellectual heritage of Ferdinand A. Lange, the founder of precision watchmaking in Germany. The common characteristics of the anniversary collection of TOURBOGRAPH “Pour le Mérite”, LANGE 1 TOURBILLON and 1815 MOONPHASE that has been created in his honour include among others an innovative gold alloy of previously unattained hardness. A further highlight of the anniversary year is the presentation of the most complicated, rarest and historically most significant Lange pocket watch ever built: the recently restored Grand Complication Number 42500 constructed in 1902.

In a world tour with exclusive exhibitions in eight cities the precious evidence of the skills of Lange’s master watchmakers past and present is being showcased to a select audience of collectors, retailers and journalists. Jan Sliva, the Head of the Historic Watch Workshop at Lange and restorer of the “42500”, vividly explains to visitors the years of detailed work that was necessary to ensure that all components of this unique and complicated masterpiece are today fully functional once again. The present manufactory displays its activities with an engraving workbench. Here visitors can watch over the shoulders of master engravers practising their artistic handiwork or try out their skills as engravers themselves under expert tuition.

The start of the tour at the beginning of September was marked by an A. Lange & Söhne exhibition opened by Sheikh Mansoor Bin Rashid Al Maktoum and held in the Atrium of the Dubai Mall, the largest shopping centre in the world. Other venues along the way are Milan, London, Madrid, New York, Tokyo, Hong Kong and Beijing. The series of events concludes spectacularly in Saxony with a Gala Evening in the Dresden Residenzschloss and an international press conference at the headquarters of the manufactory in Glashütte on 7 December. On this day exactly 165 years ago, Ferdinand A. Lange opened his first workshop here with the aim of making the best watches in the world.