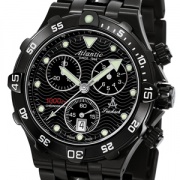 Tradition and progress in 1888, Eduard Kummer with a visionary conception, founded in Bettlach near Grenchen, in Switzerland, the “EKB” manufactury – the former Atlantic Watch factory - with 20 watchmakers. At the beginning of our century he employed already 720 workers. Eduard Kummer was a representative of the old school of businessmen, but at the same time he was a person devoted to industrial progress. In the beginning, “EKB” manufactured parts for pocket watches. Modern and severe Until 1905 the watchmakers still had to work by the light of paraffin lamps; the factory had to overcome the lack of sources of energy with the pure force of the workers’ muscles. The building of the locomobile, a portable steam-machine, was deemed by Eduard Kummer to be a true progress. He believed in this kind of modern production. Towards his workers, however, the founder was rather severe and conservative: they had to work eleven hours daily, six days a week. Those who used to still sit in the pub on Mondays - which happened quite often - were given the sack. The first real wrist-watches were produced in the beginning of the 20th century. As one of the first “Ebauches” manufacturers, “EKB” was producing very successfully, parts for this new segment of emerging wrist-watches. Innovations Throughout all the years, Eduard Kummer with his “EKB” factory was one of the most popular watch pioneers and surprised the watch-world constantly with remarkable innovations, that have kept their importance even until today. “EKB” was among the first manufacturers to present a water-resistant wrist-watch in the 20ies. They launched one of the first wrist-watches with an automatic winding movement in the 30ies. The unique invention in the 60ies, the speed-switch system which changes the date in automatic movements is today still the same as Eduard Kummer had fabricated. Tradition today The present owners of Atlantic Watch Production Ltd resolutely support the importance of manufacturing watches in conformity with the factory’s tradition. They have naturally modernized the way of managing workers. The watches are very durable, which also is important for the environment. The classical aesthetics and noble metals guarantee a lasting value of the models. The conception of the enterprise comprises a first-class customers service, upon which the buyers of Atlantic watches can rely on. Quality What does Atlantic offer? - Swiss watch making tradition since 1888 - Watches of highest quality assembled in the Atlantic factory in Grenchen. - Water-resistant watches from 30 metres up to 200 metres. - Every watch leaving Atlantic has been tested for its water resistance. - Quality controls of all produced parts after assemby. - Almost all of Atlantic watches are equipped with an unscratchable sapphire crystal. - ETA Swiss made movements of the highest quality. - Wherever possible double o-rings on crown and stem or screwed-in crowns for extra water resistance. - Use of nickel free high quality steel 316L. - Attractive consumer prices in relation to the quality - A Swiss Made product Highlights New models like the Mariner line as well as the Worldmaster 2 line have already been a success and are the new flagships in all the markets of Atlantic.