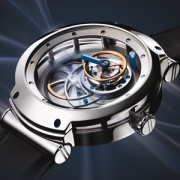 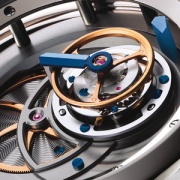 Blu proudly presents a sublime collection of “Majesty Tourbillons”, equipped with technically revolutionary triple tourbillon movements. This limited edition has no dial so that the movement and the three orbiting tourbillons can be admired in all their splendour. Each rotates at a different speed, one displaying the hours, another the minutes, and a third the seconds. The incomparable Majesty Tourbillons are at the twin pinnacles of kinetic art and state-of-the-art watchmaking. Bernhard Lederer, Blu’s founder and master-watchmaker who namely created the orbital dials of the Planet series and the award-winning MT3, reminds us: “At Blu, we craft stunning timepieces whose beauty is complimented by their timekeeping, not overshadowed by it”.