Gustav Eduard Becker (May 2, 1819 in Oel, Silesia - September 17, 1885 in Berchtesgaden) was a German clockmaker and founder of the brand Gustav Becker. 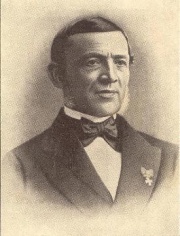 Becker learned clockmaking in Silesia and enriched his skills by learning from many masters around Germany which, during that era, was the most important country in the clock industry. His great skills gave him the ability to fix clocks at the most intricate level. During his time in Vienna, he decided to start his own clock factory.

Becker came back to Silesia in 1845, and got married. In 1847, he settled in Freiburg, and that April he opened a small clock shop with a few employees to whom he taught clockmaking. First, he created clocks in the Viennese model, and thanks to his success, in 1850 he moved his business to a better business centre.

His breakthrough came in 1852 at the Silesian Clock Fair. Crowds were drawn to his works because of the quality, and he was awarded the gold medal for the best clock in the fair. In 1854 he received large orders from the Royal Mail, and the Silesian Telegraphy Centre. After the orders, he received a fortune from the Duke of Martibore, and with this money he could pay enough to make clock cases for train stations. In the 1860s, he began to create the Classical Gustav Becker clocks. Starting from fairly simple clocks, the clocks became complex and very ornamental, and sales rose to a peak in 1875, with over 300,000 clock orders. He won at clock fairs in London, Paris, Sydney, Melbourne, Berlin and Amsterdam. Competition with the Black Forest clockmakers[edit] During the 1880s, the Black Forest clockmakers began competing with Becker, with good quality, less-expensive models. A well-known type of Black Forest clock is the Cuckoo clock. With the decline of sales, Becker stopped selling complex clocks, and returned to making more simple designs.

Gustav Becker died on 14 September 1885 in Berchtesgaden during his stay in Bavaria, and was buried three days later.

The brand was created in 1899, and in 1930 it merged with Junghans. When the Second World War ended, the company stopped producing clocks, and today, Gustav Becker clocks are no longer produced.