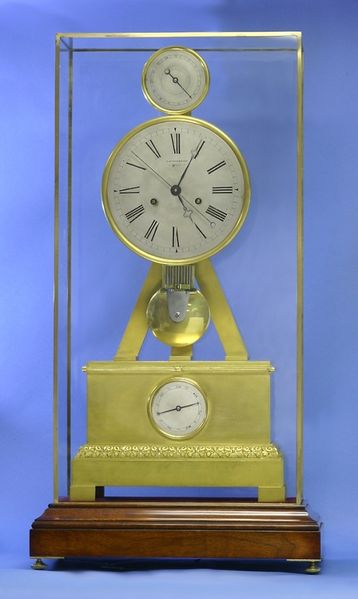 A large, rare and unusual month going multi-dial mantle clock signed on the dial Klaftenberger, 157 Regent St. The substantial ormolu tripod frame sits atop a rectangular base with cast foliage moldings. The whole sits upon a felt covered purpose made mahogany base with adjustable feet and a brass-framed dome.

The large circular month-going twin barrel movement is mounted to the ormolu tripod by a shaped bracket to which it is connected by four pinned posts. It has finely cut and spoked wheelwork, a graham type dead-beat escapement-wheel planted on the backplate, a steel adjustable anchor with jeweled pallets, a crutch with a screwed beat adjustment, a large spoked countwheel, is stamped by the maker of the movement, 'Pons, 1827, medaille d'argent' and strikes on a bell. The half-second pendulum, a nine-rod grid-iron with a brass lenticular bob, has both a regulating nut above the bob and an even finer screwed regulation incorporated into the steel suspension. A pin on a circular gear that is driven by the striking barrel activates the two trip linkages. One linkage runs upward and advances the date on a 31-day calendar while the other runs downward and advances the day.

The large silvered dial has Roman numerals for the hours, 15-minute marks, finely pierced and blued steel hands that include the hour, minute and a sweep second and is signed by the retailer, 'Klaftenberger 157 Regent Street'. The upper silver dial has concentric circles with Arabic numbers for the date and a finely cut blued indicator hand. The lower silver dial is planted in the center of the base and has a steel double pointed hand that indicates both the day, in English, and its zodiac sign.

This clock is pictured and described in Derek Roberts' 'Continental and American Skeleton Clocks', pg. 55. It is clear, however, that he relied on someone else to view the piece for him because there are several inaccuracies in the description. The pendulum is not suspended via knife-edge, but has a steel suspension. The back of the dial is not 'stamped' by Raingo, but there is an indecipherable inscription that upon quick examination could be mistaken for Raingo. And, most importantly, it is clearly inscribed on the back of the dial Aubert & Klaftenberger, 157 Regent Street.

One could only conclude that the clock was of French manufacture, made between the two Pons dates and then retailed by Aubert and Klaftenberger. It is important to note that the dials were restored at one time when Aubert's name might have been lost.