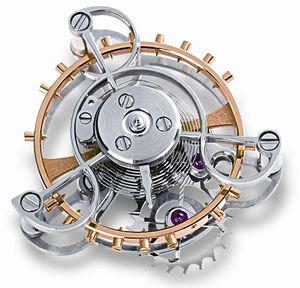 A tourbillon is an addition to the mechanics of a watch escapement. Invented in 1795 by French watchmaker Abraham-Louis Breguet, a tourbillon counters the effects of gravity by mounting the escapement and balance wheel in a rotating cage, ostensibly in order to negate the effect of gravity when the timepiece (and thus the escapement) is rotated. The effects of gravity were particularly problematic when pocketwatches were carried in the same pocketed position for most of the day. In a tourbillon, the entire escapement assembly rotates, including the balance wheel, escapement wheel, and pallet fork. The rate of rotation varies per design but has generally become standardized at one rotation per minute.