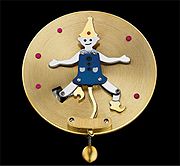 First prize in the IHC Competition goes for the second time in succession to a young watchmaking student from A. Lange & Söhne.

The original and functional stopseconds design of Lange trainee Rabea Sethmacher (22) came away with first prize in the Swiss competition for young watchmakers, the "Concours de l’Institut d’Horlogerie Cartier 2011" (IHC) on 7 May 2011 in Neuchâtel. The winner can now look forward to her prize – a one-week trip to New York.

The jury of five experts was impressed by the imaginative design as well as the quality of its practical realisation. When the mechanism is activated, a playful little mannequin not only moves its arms and legs, it also appears to pause the balance with its right knee. In fact, an arresting spring attached to the knee joint is positioned on the balance wheel when the crown is pulled out. And another Lange trainee Fanny Rühle won fourth place with a stop-seconds mechanism in the form of a broken heart.

With the first prize and two out of the top ten places, trainees from the Lange Watchmaking School have enjoyed remarkable success in the most important Swiss competition for young watchmakers. Already last year Lange CEO Wilhelm Schmid sees in this outstanding performance a positive affirmation of the quality of watchmaker training at Lange: "We are delighted that the skills and creativity of our apprentices receive the highest recognition also abroad."

The IHC Competition for up-and-coming watchmakers is held every year in Switzerland. Six Lange trainees were among the 90 entrants faced with the challenge of constructing and realising a system within 32 hours that would pause the balance when setting the watch.