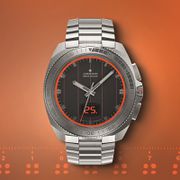 Moments of glory in timekeeping: In 2012, Junghans is celebrating the 40th anniversary of time keeping at the Olympic Games in Munich. With its latest ‘1972’ range, Junghans aims to bring back to life the sporting suc-cesses of the 70s as well as the style of this time. As the official time-keeper at the Summer Olympics, Junghans succeeded in supporting top-class sport with its objective and undisputed evaluation, setting new standards in time keeping at high-performance sporting events.

Junghans once more proved itself to be a reliable time-keeper at various international sporting competitions following its work at the Olympic Games in Munich. The Junghans time measurement team was supported by a competent partner from the world of high-performance sports, the hurdling world record holder, journalist and qualified engineer Martin Lauer. Junghans worked with him to record times in numerous disciplines, including the 100m sprint, archery and rowing, by the application of specially developed sportspecific measuring instruments such as the multicounter. The latter was used to track all eight boats individually during rowing events. Junghans’ comprehensive range of innovative measuring instruments also included starting pistols which simultaneously emit an acoustic, optical and electrical signal as well as light barriers, digital clocks and high precision finishing line photographs and film recordings. In the case of the latter, the Schramberg-based company compiled the world’s first colour finishing line photos in paper form for the press and thereby succeeded in sharing star sporting performances with the entire world. Following its successful supporting of the Olympic Games in Munich, the Junghans time measurement team travelled to various other important athletic tournaments in Mexico, Prague and Turin to ensure that any records set were clearly measurable, too.

The new ‘1972’ range aims to celebrate the sporting successes of the 1970s as well as Junghans’ 40th anniversary of time keeping at the Olympic Games in Munich, not to mention the unmistakeable style of this era. All models trace their heritage to Junghans designs from this period. The flat case forms with their clear edges are based on a 1970s design and incorporate the blue, red and orange colour accents typical of the era. All of the models include a rotating bezel with clear 15 minute markings as well as striking square appliqués and water resistance up to 10 atm. The range is headed by the ‘1972 Mega Solar’, a high precision multifrequency radio-controlled solar watch. Coming with an orange tip, the seconds hand is particularly striking. In addition to the models introduced above, the collection also includes three quartz chronoscopes and three solar quartz chronoscopes which will be launched in the course of the year. With its technical and visual diversity, the ‘1972’ range is the perfect reflection of a time when Junghans suc-ceeded in bringing a new dimension to top-class sports: highest precision in measuring keeping.

For more than 150 years, the Junghans brand has been standing for a clear identification with Germany. Characterised by its long traditions, innovations and values, the name Junghans has always been associated with qual-ity, reliability, passion and precision. During its extensive history, the Schramberg-based long-established company has successfully shaped the history of the watch industry and preserved its philosophy through new and ongoing developments in technology and through combining forward-thinking ideas with a drive for precision. Modern national and international business structures enable Uhrenfabrik Junghans to continue introducing innovative ‘Made in Germany’ products in the future and to further developing the unique success story of the watch with the star.