One of the highlights of the SIHH 2012: LANGE 1 TOURBILLON PERPETUAL CALENDAR with new type of month ring. 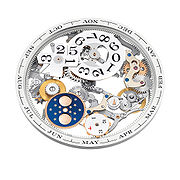 The heart of the new LANGE 1 TOURBILLON PERPETUAL CALENDAR with new type of month ring: The Caliber L082.

Following a successful start at the Geneva Fine Watch Salon SIHH, the Saxon luxury watch brand is presenting its new models in their own seven boutiques across the world.

The coveted timepieces from A. Lange & Söhne can be acquired in 57 countries of the world. The growing internationalisation of this traditional brand with its Saxon roots is illustrated by the locations of their boutiques: apart from the Dresden shop in the vicinity of the company’s head office, A. Lange & Söhne boutiques are to be found in Shanghai, Tokyo, Seoul, Hong Kong and soon also in Abu Dhabi and Dubai. Following their successful presentation in Geneva, the new models for 2012 can be admired at close quarters in these locations on a tour of all seven metropolitan centres from February to May.

Watch connoisseurs and friends of the brand in Saxony will be the first to experience the latest highlights of Lange’s watchmaking artistry at close quarters. From 11 to 19 February, the new releases collection will be on show at the A. Lange & Söhne boutique, near the Church of our Lady (Frauenkirche) in Dresden. All but a home match. Further venues and dates for the three-month tour are Tokyo (2 to 9 March), Seoul (26 March to 1 April), Shanghai (9 to 13 April), Hong Kong (16 to 22 April) and then, on the occasion of the openings, Abu Dhabi and Dubai.

The 2012 collection was received by journalists and retailers at the Salon International de la Haute Horlogerie (SIHH) with great enthusiasm. It is the expression of A. Lange & Söhne’s ongoing quest for perfection. The central theme this year is the LANGE 1 watch family, headed by the LANGE 1 TOURBILLON PERPETUAL CALENDAR. With two large complications and a new type of instantaneously jumping month ring, it demonstrates once again the innovative potential of the manufactory. With a newly developed movement, the reworked GRAND LANGE 1 exhibits elegant proportions. In addition, a luminous LANGE 1 TIME ZONE in white gold commends itself as the perfect travelling companion. The DATOGRAPH UP/DOWN illustrates that a timepiece widely considered perfect can still be improved. It has grown to 41 millimetres and incorporates an extended power reserve and a power-reserve indicator. Finally, the SAXONIA THIN, introduced last year, and with a height of just 5.9 millimetres the thinnest Lange watch, is now also available in white gold.