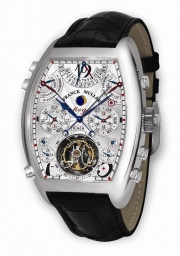 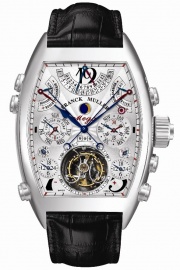 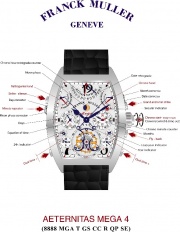 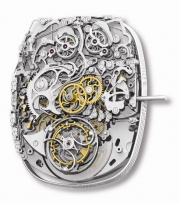 The Aeternitas Mega is the pinnacle of success in the art of watch-making in terms of complexity and complications. A grandiose work of art culminating in the design of the most complex wrist watch ever made in the world thanks to the multifaceted skills of our watch-makers and constructors. Each of the 1,483 components was designed to give the watch an elegant design in the pure traditions of the old “cadraturiers” (the mechanisms located under the dial) of the Vallée de Joux, Switzerland. This watch inspires countless emotions as an exceptional time piece and simply unique in the eyes of lovers in the art of fine mechanics and luxury watch making.

From the very beginning, the Mega was incorporated in to the Aeternitas project and is, indeed, the culmination of this project. The basis was always the same, an automatic Tourbillon, but, with two motors. The plate has been hollowed out on the dial side to hold the striking mechanism. In comparison to the Aeternitas versions, the four Aeternitas Mega versions only have a thickness of 0.2mm as it had to accommodate the striking mechanism of the “Chime of Westminster”. The Mega sets itself apart thanks to its “Grande Sonnerie” Chime of Westminster striking mechanism sounding on the hours and quarter hours. In the “Petite Sonnerie” version, the strike on the hour is removed, and it only sounds on the quarter hours.

The programming of the large and small striking mechanisms is done through simple pressure on a waterproof push-button placed at the 10.30 mark on the watchcase. This push-button programmable function enables the movement of the striking mechanism to be stopped. The minute repeater enables the “Chime of Westminster” to be activated at any time, and so giving the complete strike of the hours, the Westminster quarters and the minutes. The “Grand Sonnerie” is the only watch in which the Tourbillon is visible on the dial side, which limits the space available for the “Grand Sonnerie” mechanism and thus makes the design even more complicated.

The glass sapphire case back enables the harmoniously chiselled and decorated pieces that overlap to be admired in a stunning combination as a dazzling ballet. This masterpiece of complications and know how was entirely designed and manufactured by the Franck Muller group and once again demonstrates their vast array of skills and ability in the Art of HAUTE HORLOGERIE.