The exciting era of the “wild ’60s” was the source of Glashütte Original’s designers’ inspiration in creating the Senator Sixties line. With the Senator Sixties Chronograph the Saxon manufactory now adds another aesthetic model to a line already so crowned by success.

Turning back time is not necessary in the case of the Senator Sixties Chronograph since this timepiece symbolizes the joie de vivre of the ‘60s very clearly for its wearer. The convex shape of the sapphire crystal on the front and likewise domed dial cleverly attract the observer’s eye.

Domed, skeletonized hands glide harmoniously across the satin-finished dial, while the diamond-cut hour markers featuring characteristic dots of SuperLumiNova and the extravagant font of the numerals illustrate design typical of these years.

Glashütte Original’s designers positioned the chronograph totalizers at 3 and 9 o’clock on the dial. Polished silver zones allow the counters to integrate beautifully into the entire look of the dial design.

Rounded buttons placed on the side of the case.

The start and stop functions of the stylish chronograph are easily activated by the wearer with the aid of rounded buttons placed on the side of the case.

It not only allows a direct view into automatic manufacture Caliber 39-52 with its characteristic elements of Glashütte watchmaking such as a three-quarter plate, swan-neck fine adjustment, Glashütte ribbing, and double sunburst decoration, but also for the first time makes a side view of the rotating oscillating weight crafted in 21-karat gold possible. 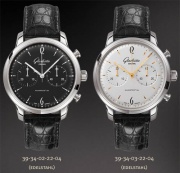 The energetic look of the Senator Sixties Chronographen is continued in its finely worked crocodile skin strap, the refined scales of which perfectly complete the retro design of this timepiece. The stainless steel model is available with a choice of a silver-colored or black dial.