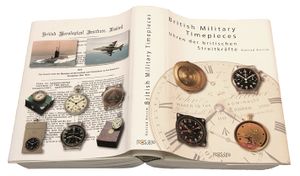 A large detailed reference book cataloguing the wide variety of chronometers, deck watches, pocket watches, wristwatches and clocks used by the British Army, Navy and Air Force in the 19th and 20th century. There are also chapters on watches used by Commonwealth and French Forces as well as Japan.

Konrad Knirim came to fame when he produced his book on German Military Timepieces in 2002 (Vol I), which established him as the foremost authority.

- the precision pendulum clocks of the Royal Observatory
- the chronometers of the Royal Navy
- RN ship's and other wall clocks RAF mantle clocks and instrument timers
- aircraft clocks and aircrew watches from the RFC, the RNAS and the RAF
- chronometer watches and deck watches of the Royal Navy and the Royal Air Force
- pocket watches and timers of all three services
- wrist watches, chronographs and diver's watches until today
- the appendix contains Japanese, Australian, US, French and Canadian timepieces.

It is bi-lingual with each page having two texts; English to the left and German to the right.