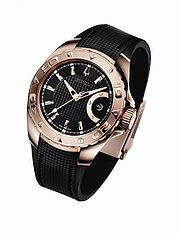 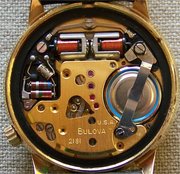 Bulova Accutron Movement. The tuning fork is between the two electromagnetic coils at the top of the watch, which drive it.

The Swiss Made BULOVA ACCUTRON brand fully embodies the horological expertise of the Bulova Corporation. Born in 1875 from the visionary spirit of its founder Joseph Bulova, the company has made an indelible imprint on watchmaking history thanks to its avant-garde spirit and its enduring tradition of innovation. From the invention of the electric clock in 1931 and the first radio and TV adverts in the 1920s and 1940s; to the watchmaking revolution represented by Accutron technology embodied in the first fully electronic watch presented in 1960; and right through to the onboard instruments equipping the modules of 46 NASA space missions. All these and other major horological milestones can be admired or rediscovered in the book entitled "Bulova, a Legacy of Innovation". a work in which the brand looks back at its roots and retraces its history by describing the numerous technical breakthroughs of one of the pioneers of 19th century horology.