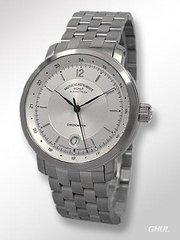 A chronometer is a timekeeper precise enough to be used as a portable time standard, usually in order to determine longitude by means of celestial navigation. In the world of watches, the term is also often attached to those tested and certified to meet certain precision standards. In Switzerland, only timepieces certified by the COSC may use the word Chronometer on them.

The Magnitude of the Problem [Bearbeiten]

Although the clock method would ultimately prove the winner, the logic of this was not at all apparent to many talented scientific and mathematical minds of the early modern era. Rival theories abounded. Among those offered were Galileo Galilei's (1564–1642) proposal of measuring and using the motions of Jupiter's four moons as celestial clocks, and comparing the times when these moons eclipsed one another with the same astronomical event at his local time.