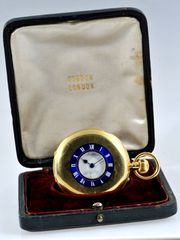 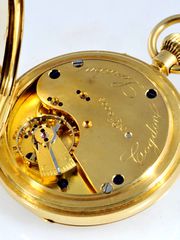 On the 9th August and a few following days, after the stranding, observations were taken by the master and officers, and it was then discovered that the chronometer was obviously out of order, because according to its readings the vessel should have been some 40 miles to the westward of her actual stranded position.

From the master's and the chief officer's evidence it appears that there was only one chronometer on board, that it was rated in November last at Newport (Mon.), and checked subsequently at Cape Town and Durban, and when the vessel was off the Comoro Islands on the 26th July at 4 p.m.—that is 13 days before the stranding—it was found to be practically correct. The chronometer was kept in the chart room, and from the time of the stranding the chart room was always under lock and key at night time. On the 28th August, the chief officer wound the chronometer in the morning as usual, and next morning (29th) he found it had stopped on the previous day about two hours after it was wound. At the master's request, Commander Wilson (port officer) brought the chronometer away and kept it under the observation of the superintendent of the Local Government Observatory for four or five days, but as he could not get it to go for more than 15 minutes at a time, it was sent to Messrs. Lund & Blockley, Opticians of Bombay, for examination. The report of this firm was sent to Messrs. Donald Graham & Company, Karachi (agents of the vessel), and has been produced by one of their clerks. Although, strictly speaking, this is not evidence unless produced by a representative of Messrs. Lund & Blockley's firm, we have admitted it, because it greatly assists in elucidating the cause of the casualty, and moreover the bona fides of the report are not open to question. It would, in our opinion, be a waste of time and money in this case to secure the attendance of a member of the firm from Bombay to give evidence on the lines of their report. The report is an important document and the material portion reads as follows:—

"Our managing partner himself went to the docks to take delivery of the chronometer, No. 1595, by W. R. Cogdon, London, ex-s.s. "Lhassa." He interviewed the chief officer of the "Lhassa," who said that the instrument had been kept with the ship's chronometers during the voyage, and that it was in the same condition as when delivered on board, viz., fully wound but not going. ' "We have carefully examined the movement and find that owing to the lack of oil the top pivot of the centre wheel was stuck fast in the hole, thus taking all the power off the escapement and stopping the instrument. Prior to stopping it, this fault must have rendered the chronometer quite unreliable. As this is an important matter for the captain of the s.s. "Cresswell", we should like to inform you that the fault in the instrument could not in any way have been due to any act or negligence on the part of himself or anyone on the ship, nor could it have been rectified by any but a competent watchmaker."

From the facts brought to light in the evidence, we are convinced that the stranding of the s.s. "Cresswell" was due solely to the vessel's chronometer (which was duly rated and checked whenever possible) getting out of order unexpectedly and unknown to anyone on board, and we consider that no blame or responsibility for the casualty rests on the master or officers of the vessel, all of whom appear to have attended to their duties in a careful and capable manner.

It is apparently customary for vessels of this type to carry only one chronometer, and the Board of Trade Rules do not appear to touch on the provision of chronometers, except in regard to emigrant ships, and looking to the rarity of cases of failure of the instrument such as the present, we do not consider we would be justified in recommending the introduction of a rule so as to render the maintenance of three chronometers obligatory.