The first Lange store abroad has been unveiled in Shanghai just a few months after the official opening of the first A. Lange & Söhne boutique in Dresden. Chinese watch lovers have been waiting for years for the chance to also acquire the classic time­pieces from Saxony in the “Central Kingdom”. They can now experience the works of art bearing the quality seal “Made in Germany” at close quarters.

Anyone who has visited the Lange manufactory and has been able to look over the shoulders of the master watchmakers while they carry out their intricate work knows how much craftsmanship, precision and above all passion go into the timepieces bearing the signature “A. Lange & Söhne”. However, it is a long way from Shanghai – 8,476 km to be precise – to the idyllic watchmaker’s town of Glashütte near to the Saxon capital of Dresden. With its new sales concept, the traditional watch brand therefore also wants to create a new world of experience at locations a long way away from its native country. 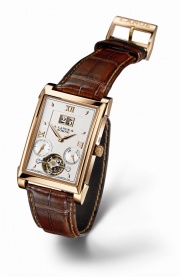 An exclusive world of experiences on a smaller scale opened on the 1st of July in the heart of China’s pulsating metropolis Shanghai right by the Huangpu River’s waterfront promenade: A. Lange & Söhne Shanghai. A place where time is at home and where visitors are invited to encounter the history and philosophy of Lange watchmaking artistry. The new business premises are located in the historic UNESCO building “Bund 18”. At the same time, the store’s opening premiered the new CABARET TOURBILLON in China and marks the brand’s entry into the Chinese market. Another Lange store is planned for the end of the year in Beijing.

The market entry into China is currently one of the most important projects for arguably Germany’s most traditional watchmaker – its timepieces belong to the uppermost echelons of the luxury watch market. Lange CEO Fabian Krone: “Demand among Chinese watch lovers for A. Lange & Söhne timepieces has greatly increased in recent years. Opening separate stores in China is therefore right at the very top of our agenda.” In China, the activities will be managed by Lange regional manager Ming Lu. In Lu's eyes, A. Lange & Söhne is “a fascinating brand with enormous potential on the Chinese market. Its special appeal lies in horological artistry steeped in both tradition and innovation and in the myth that has its roots in the comeback story.” 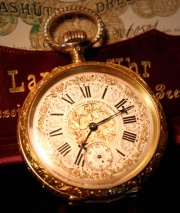 The mechanical works of art produced by A. Lange & Söhne with their unique attributes are linked to the great heyday of a family business founded in 1845 by the Dresden watchmaker Ferdinand Adolph Lange. Back then, Lange crafted pocket watches of exceptional quality that were coveted the world over. Nowadays, they are sought after rarities that fetch top prices at auctions. However, the family business was expropriated after the Second World War, with the brand name disappearing from the dials of watches to become a legend in collectors’ circles. It was only after German reunification – four decades later – that Walter Lange, the great-grandson of the company’s founder, was able to resume the work of his forefathers, which had been interrupted, and breathe new life into the traditional brand. In the meantime, A. Lange & Söhne has again taken up a leading position in precision watchmaking and holds its own against the most famous Swiss luxury brands. Since the company was reestablished, Lange master watchmakers have been painstakingly making wrist watches by hand exclusively in solid gold and platinum cases. Only a few thousand timepieces of perfect quality, equipped with exclusive manufactory movements, leave the Lange workshops each year.

These include the LANGE 1, which has garnered numerous international awards, with its patented outsize date and twin mainspring barrel offering a power reserve of more than three days. It became a design icon thanks to its striking off-centre dial and has shaped the face of the brand from the very beginning. Lange has presented 26 manufacture movements (calibres), which were developed in its own construction department, since 1990. These include sophisticated masterpieces like the Flyback Chronograph Datograph, the TOURBOGRAPH “Pour le Mérite”, which is limited to 101 watches and unites three grand complications at the same time with a tourbillon, rattrapante chronograph mechanism and fusée-and-chain transmission, and the LANGE 31 with a power reserve of a whole month and a constant-force escapement that ensures uniform power delivery throughout the entire period.

Like the store in Dresden, A. Lange & Söhne Shanghai also reflects the personality of the brand shaped by the motto “state-of-the-art tradition”. The furnishings and ambiance embody the same spirit of perfect craftsmanship and technological innovation expressed in the watches of A. Lange & Söhne. Lange’s leitmotif is reflected in almost every detail of the sales rooms: the coffered walls in typical Lange grey create a pleasant contrast to the indigenous acacia wood. The design conceals the latest in communication, presentation and security technology. The display cabinets are made from “Luccon”, a light transmitting concrete, and light-coloured sandstone was selected for the floors – the same material used to construct so many buildings in Saxony, above all the Dresden’s world-famous Frauenkirche. The collection drawers housing the precious timepieces have fronts made from Meissen porcelain. Finally, mirrors treated with a special technique reveal images from the early technical drawings of Ferdinand Adolph Lange. However, it is the art of watchmaking that takes centre stage here: almost the entire collection of elaborately crafted timepieces from Saxony can be experienced first-hand at A. Lange & Söhne Shanghai.