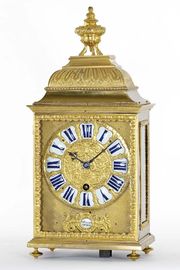 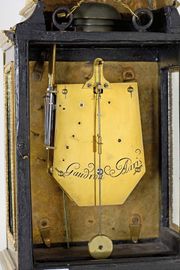 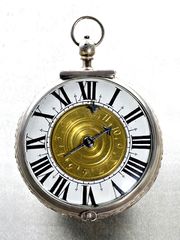 The signature Gaudron à Paris appeared as early as 1660 on clock movements produced by the workshop of Antoine Gaudron, but little is known today about this clockmaker. His works were both admired by colleagues and collected by the French nobility. An examination of Gaudron's will shows that he was successful and prosperous, leaving substantial dowries to his three children and a house pleasantly furnished with numerous pieces of costly Chinese porcelain.

In 1698 Gaudron brought his two sons into his business. The firm then traded not only in clocks but also in precious stones, paintings, mirrors, porcelain, bronze, and jewels. Gaudron was one of the first Parisian makers to use the newly invented long pendulum in his clocks. He also invented some interesting clock movements with both simple and complicated astronomical indications. Some of the most fashionable ébénistes of the period, including André-Charles Boulle, supplied elaborate clock cases for Gaudron's movements. (Paul Getty Museum)

Antoine Ier, born circa 1640, was received as master at Saint-Germain des Près between 1660 and 1665, and subsequently in Paris in 1675. He was appointed Juré in 1690, and took his sons into partnership in 1698 to trade in " Clocks, semi-precious stones, pictures, mirrors, porcelain, bronzes and jewels". His business was established at Place Dauphin a la Perle in 1698 and then a La Renome in 1709. Antoine Gaudron married Baignoux in 1671, and had three children - Pierre, Antoine II, and Marie-Anne. He died in 1714, a wealthy and much respected man, being highly spoken of by his peers including Julien Leroy.

Antoine I Gaudron was born circa 1640 and died in Paris on August 3, 1714. Married to Anne Baignoux in 1671, he was the father of Pierre, Antoine II and Marie- Anne who married Guillaume Hubert, merchant goldsmith in Paris and later Marchant-orfevre de la Reine d'Angleterre (Merchant Goldsmith tothe Queen of England) in London. Received as Master at Saint-Germain- des-Pres between 1660 and 1665, then in Paris on June 5, 1675. He was Jure from 1690 to 1692. In 1698 he took his son Pierre as partner to trade in clocks, precious stones, pictures, mirrors, porcelain, bronzes and jewels. They were first established Place Dauphine at La Perle, in 1698, and in 1709 moved to new premises at La Renommee. He died comfortably off, leaving more than 174,000 livres. Technically, he invented remarkable movements with several functions. According to his son Pierre, he made in 1688 a "regulator... which followed equation by means of a curve which raised or lowered the clock", whichwould make it the first French equation clock. It is highly probable that this invention, unconfirmed by other evidence, was only partiallyperfected. Antoine I Gaudron was Charles Le Bon's best man at his wedding on August 18, 1707, while Pierre Gaudron wrote in his will that Julien Le Roy "has always showed the greatest gratitude to, and the most sincere admiration for my deceased father", leaving him the 1688 clock among others. It is possible that Le Bon and Le Roy were his compagnons, they were certainly his pupils.