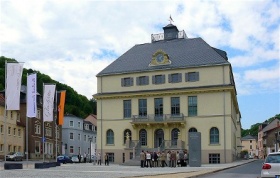 Watch Museum with an international reputation

On 22 May 2008, the new "German Watch Museum Glashütte" opened its doors in the former School of Watchmaking Glashütte.

There are more than 400 unique exhibits on two floors with an exhibition space of 1000 m². With the help of multimedia, one can learn about Glashütte pocket watches, pendulum clocks and wristwatches, historical certificates and patents, escapement modelstools and marine chronometers, workbenches and astronomical models and many more.

Thematically, the exhibition is divided into historical rooms and time rooms.

The historical rooms convey the chronological background of the watch town and present, at the beginning, the celebrities and the founding fathers, thanks to whom Glashütte became an important centre of fine German watchmaking and watchmaker training. Throughout the exhibition, there are other major stages, such as the founding years, the First and Second World Wars, the time of disintegration and expropriation just like the German reunification and the new beginnings.

The time rooms do not fit in the chronological progression of the Glashütte watch history and get the visitors into the world of different kinds of clocks. In such a way the visitors can learn the precision and the interaction of hundreds of details. They can find out something interesting on their own in the multimedia time room with an interactive glossary of chronometry.

This "time world" is designed not only for watch connoisseurs but also to nonexperts, families and young people in order to transmit to the youth the admiration of the art of watchmaking and the knowledge of timekeeping.