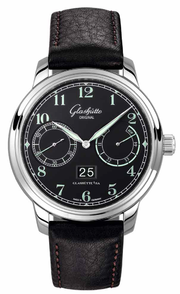 Read in the absence of light.

In 2015 Glashütte Original takes up the spirit of discovery once again with a new version of its Senator Observer, a sophisticated observation watch (also known as a ‘deck watch’) evoking the enthralling history of navigation at sea. The Saxon manufactory’s in-house dial manufactory has made extensive use of luminous surfaces to make the new Senator Observer easy to read in the absence of light: the elegant white gold hour and minute hands, bold Arabic numerals, and chapter ring hour indexes are all highlighted with green Super-LumiNova, a phosphorescent pigment that absorbs light by day and emits it at night. The hand and indexes of the small seconds subdial at 9 o’clock and the power reserve indicator at 3 o’clock are also luminous by night. By day the matt black dial offers an elegant backdrop and contrast to the Arabic numerals, drawn in a font once widely used for precision pocket watches made in Glashütte at the beginning of the 20th century. At the centre of the lower half is the noted watchmaker’s compelling Panorama Date display.

One of the finest makers of observation watches was Julius Assmann, whose Glashütte firm specialised in the manufacture of these handmade wonders. The precision and reliability of its observation watches - in particular under extreme weather conditions - made them indispensable instruments for navigation officers, pilots, and pioneering explorers such as Roald Amundsen, who took a number of observation watches with him on his legendary expedition to the South Pole. A highly precise and reliable pocket watch produced by the Glashütte watch company Julius Assmann caught Amundsen’s attention in 1910, and he purchased it at the German Naval Institute in Hamburg. One year later, Amundsen and his team were the first human beings to reach the geographic South Pole. Taking great pride in this tradition, Glashütte Original has developed a series of high-end mechanical observation watches. The first, a limited edition in white gold honouring the memory of Julius Assmann and Roald Amundsen, the Senator Observer 1911, was presented in advance of Baselworld in 2012. At the fair itself later that year came a stainless steel version featuring elegant silver-grained or lacquered grey dial variants. All were inspired by the observation watches made in Julius Assmann’s Glashütte atelier, as is the new Senator Observer unveiled at Baselworld 2015.

A superb automatic movement for a sophisticated deck watch [Bearbeiten]

At the heart of the Senator Observer is the automatic Calibre 100-14, an exquisitely finished self-winding movement with a 55 hour power reserve (+/- 10%). Although traditional observation watches used hand-wound movements, the Senator Observer is fitted with a contemporary automatic movement, in order to maximize comfort for the wearer. Thus, the ‘Ab Auf’ indicator on the dial represents a true power reserve, rather than a simple indication of running time. The exquisite finishing of the automatic Calibre 100-14 is easily visible through the sapphire case back. The movement features the characteristic Glashütte three-quarter plate with stripe finish and a skeletonized rotor with 21-carat gold oscillating weight and the gold-plated double-G mark that distinguishes high-end mechanical watches from Glashütte Original.