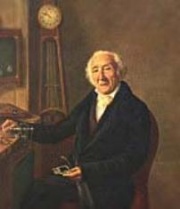 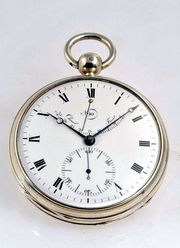 Jacques-Frédéric Houriet was born on February 25th, 1748 in La Chaux d'Abel, which is located near La Ferriere. From 1759 to 1768 he apprenticed and worked in Paris for Julien le Roy, Pierre le Roy and Ferdinand Berthoud. While working for Berthoud he collaborated with Ferdinands nephew, (Pierre) Louis Berthoud. During his time in Paris he formed friendships with Abraham Louis Breguet, Jean Romilly, Antide Janvier and Louis Recordon. After his years of study in the capital of France he returned to Switzerland to establish himself in Le Locle. At first he worked together with his brother and his two sisters. A short while after he became business partners with David Courvoisier, who at the time was the head of the firm Courvoisier & Films. In 1797 Urban Jürgensen became his employee. A few years later Jürgensen married Houriets daughter, Sophie-Henriette. In 1919, at the age of 75, Houriet decided to continue working alone. He only manufactured pocket chronometers and custom-made items. Despite his old age he carried on with research and experiments on the foundation of isochronism, temperature compensation and the effects of magnetism of chronometers. This is how golden, or more specifically spheric hair springs emerge, which appear in the form of an orb or a spheroid. Jacques- Houriet is considered the founder of Swiss chronometry. He was a member of the Paris Academy of Sciences and honorary member of the Genevan Society of Arts. Jacques-Frédéric Houriet died on January 12th, 1830.