Less Is More: the GRAND LANGE 1 with a New Face

Less Is More: the GRAND LANGE 1 with a New Face

With monochrome azuré dials, the enlarged version of the most famous A. Lange & Söhne watch epitomises the grace of simplicity. 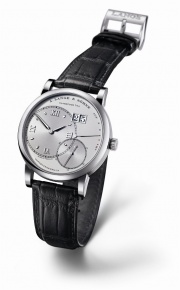 The GRAND LANGE 1 with a New Face.

Probably more than any other timepiece in the last decade of the 20th century, the LANGE 1 exemplified a truly new style. With the first outsize date integrated in a wristwatch and the off-centre dial displays, it instantly became a design icon when first presented to the public in 1994. Today, it symbolises the successful renaissance of the eminent A. Lange & Söhne brand. Since 2003, the manufactory has been crafting the GRAND LANGE 1 for the aficionados of exquisite, mechanical timepieces who prefer slightly larger cases. It is this proud version that features a new monochrome dial design that in its formal reduction more faithfully emulates the original.

A focus on essentials is the best way to endow constructive logic with an aesthetically convincing expression. Ludwig Mies van der Rohe, one of the pioneering masters of modern architecture, translated this insight into the concise formula: “less is more”. One could well describe this ideal as the implicit maxim of Lange’s calibre engineers and product designers. After all, the most precious materials and excellence in horological artistry, combined with a classic design approach reduced to the essence, have always been hallmarks of the Saxon manufactory. The constant quest for better alternatives, greater ease of use, and more elegant forms repeatedly inspires the calibre engineers and designers at Lange to find innovative solutions and achieve exceptionally beautiful results. The dial was reworked because of the desire to create a stronger visual rapport between the GRAND LANGE 1 and the LANGE 1. But until recently, the implementation of the delicate azuré grooves – a relief structure composed of concentric circles – on the larger dial with the hour and minute indication was thwarted by technical constraints. Meanwhile, a new tool has made it possible to apply this noble decoration on larger-diameter areas as well.

The GRAND LANGE 1 is available in yellow gold, pink gold, and platinum with matching monochrome solid-silver dials in champagne, argenté, and rhodié. And of course, it possesses all the assets that made the LANGE 1 such a coveted timepiece from the very beginning: The exclusive manually-wound movement superbly finished to Lange’s highest quality standards, the twin mainspring barrel for a power reserve of more than three days, the progressive power-reserve indicator, and the patented outsize date. With its new face, it embodies the successful synthesis of quality, tradition, and innovation in the highest spheres of haute horlogerie.