Progress through Standstill: the CABARET TOURBILLON

Progress through Standstill: the CABARET TOURBILLON

The tourbillon was invented of Abraham-Louis Breguet more than 200 years ago. It has lost none of its fascination since then. A. Lange & Söhne has just written a new chapter in the history of the “whirlwind” with the new CABARET TOURBILLON and the first stop-seconds feature ever implemented in a tourbillon calibre.

In 1997, the CABARET amazed the world with its elegant rectangular shape that evoked the luxury, charisma, and perfection of the Art Deco epoch. Eleven years after the launch of its predecessor, the CABARET TOURBILLON by A. Lange & Söhne now sets the stage for a world debut starring the balance in a rotating carriage. For the first time ever, the “whirlwind” – the literal translation of tourbillon – has been tamed with a stop-seconds mechanism. 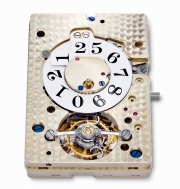 But first things first. An ingenious idea inspired the development of the carriage escapement for which a patent was filed in 1801. It was predestined for pocket watches that were typically slipped into a vest pocket in the same upright orientation. In the tourbillon, the rate-governing parts – the balance and escapement assemblies – were integrated in a cage that rotated about the fourth wheel. This neutralised the position error caused by the pull of gravity on the balance wheel which can never be poised with absolute perfection, resulting in greater rate accuracy. In modern wristwatches that are worn in constantly changing orientations, the need for rate corrections is no longer a significant issue. Nonetheless, because of its intricacy and complexity, the tourbillon has lost none of its original fascination. Executed in artisanal perfection as in the three tourbillon calibres crafted so far at Lange, it remains the archetype of horological complications mastered only by the best of the watchmaking elite.

The movement caseback side.

Yet one question remained unanswered: if the tourbillon stands for superior rate accuracy, why had no one so far invented a device that would make it possible to instantaneously and precisely stop and restart such a watch for synchronisation purposes? This awkward enigma that persisted throughout the 200-year history of the tourbillon challenged the calibre designers at Lange who finally found a solution. They decided against the option of stopping the entire tourbillon cage mechanically from within the movement. With this rather simple approach, the balance wheel would slow down and eventually coast to a halt. It would need to be “kick-started” to resume its reciprocating motion. This unsatisfactory approach was rejected. To preserve the potential energy of the balance spring during the braking process, the only viable alternative was to directly and instantaneously brake the balance wheel inside the cage itself. This was the only way to assure that the balance wheel would immediately begin to oscillate again after the “brake” had been released.

How to Stop a Tourbillon [Bearbeiten] 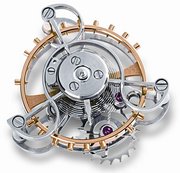 Tourbillon
But how can the oscillating balance wheel of a tourbillon escapement be stopped in a rotating cage, especially because one of the three cage posts is in the way every 20 seconds? Until recently, this problem had frustrated all specialists involved with tourbillon escapements, leaving it up to Lange’s engineers to find an answer more than two centuries after the invention of the tourbillon. Their solution in brief: 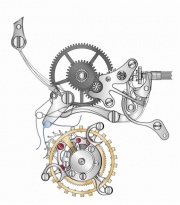 The stop seconds mechanism
of the CABARET TOURBILLON
pulling the crown initiates a complex linkage motion that causes a stop lever with two bent, V-shaped spring arms to contact the outer rim of the balance wheel, stopping it immediately. This intervention could potentially be foiled when one arm of the V-shaped braking spring happens to land on one of the three posts of the tourbillon cage. For this reason, the delicate two-armed steel spring is hinged at a rotation point of the brake lever. In other words, even if one arm of the spring is resting against the cage post, the other one will still advance to the balance wheel rim and stop it just as reliably as if both arms had engaged. The asymmetrically curved shapes of the two spring ends were empirically determined in extensive tests. Their special geometry assures that the contact pressure they exert is optimised in all conceivable positions of the brake spring relative to the balance wheel.

Additionally, the ends of the brake spring are bent so that they cannot accidentally engage when the balance wheel is arrested and released. So this is not only an intelligent complication aesthetically showcased on the dial side of the CABARET TOURBILLON, it is also a useful innovation commensurate with Lange’s heritage. The patented invention finally makes it possible to precisely measure the improved rate accuracy of the tourbillon.

But there’s more to the CABARET TOURBILLON than meets the eye: the twin mainspring barrel of the newly developed, manually wound calibre L042.1 movement has a power reserve of five days or 120 hours when fully wound. A power-reserve indicator at 4 o’clock dependably reminds the owner when it is time to transmit fresh energy to the masterpiece. Beneath the 12, the famous Lange outsize date forms a visual equilibrium with the tourbillon exposed in a dial aperture. The form movement, crafted and finished to the highest Lange quality standards, is a veritable feast for the eyes. The lavishly decorated three-quarter plate made of untreated German silver is accented by six screwed gold chatons. Three further chatons are located on the hand-engraved intermediate-wheel and tourbillon cocks as well as on the specular-polished tourbillon bridge on the dial side. The pivots of the balance-wheel staff are suspended between two diamond endstones. Accompanying 45 ruby jewels, these diamonds stand for horological excellence and are reminiscent of the peerless 1A quality pocket watches once produced by Lange. A rectangular case in platinum or pink gold, measuring 29.5 by 39.2 millimetres, provides a classy setting for the world debut of the first stop-seconds tourbillon.