The LANGE 1 for Night Owls

The LANGE 1 for Night Owls 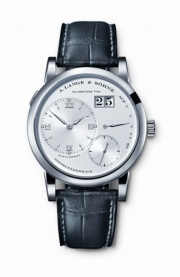 From the very beginning, the LANGE 1 was a bold statement against conformism and Saxony’s answer to stylistic uniformity in watch design. That’s what made it so successful around the world. Now, in a stately white-gold case with luminous hands and appliques, it presents itself in a new livery: radiant, sleek, and distinctive.

No other watch played a more prominent role in the revival of the A. Lange & Söhne brand than the LANGE 1. And since it was launched nearly 15 years ago, it has lost none of its original charisma. Right from the start, it projected an unmistakable personality. And in an inimitable way, it melded tradition, progress, and superb quality. The LANGE 1 thus became the symbol for the rebirth of a marque that has always stood for exclusive timekeeping instruments: A. Lange & Söhne. With a bright argenté dial and a striking white-gold case, the design icon now reveals new, gleaming facets.

Even after nightfall, this watch beams with its luminous, Superluminova-coated rhodiumed gold hands and appliques on the off-centre time and power reserve dials. So apart from the time of day, the new beacon from Saxony also vividly delivers the time of night between sunset and sunrise.

The new member of the probably most acclaimed watch family in the world is also powered by the eminent calibre L901.0 movement. From the horological perspective, it features fascinating details that watch connoisseurs the world over associate with the A. Lange & Söhne brand as the hallmark for quality “Made in Germany”: the typical three-quarter plate made of untreated German silver, screwed gold chatons, the twin mainspring barrel with a power reserve of more than three days, the patented, highly intricate whiplash precision index adjuster on a hand-engraved balance cock, and the ingenious outsize date display that in the 1990s prompted an entire industry to rethink the fundamental concepts of the dial. To emphasise its temperament, the LANGE 1 in the white-gold case has a black crocodile strap with a white seam and a Lange prong buckle in solid white gold.