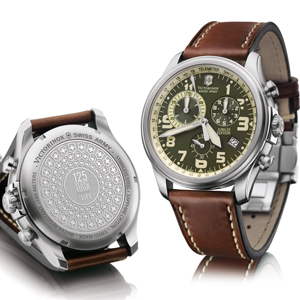 In 1884, in the small village of Ibach near the Swiss Alps, Karl Elsener started his cutlery factory. He became the official supplier of the Swiss army with the famous soldier’s knife. Later, he developed the now universally popular Officer and Sport knives, officially registered in 1897. In 1909, Karl Elsener named his company Victoria in memory of his mother, and when stainless steel (Inox) was invented in 1921, the family company became Victorinox.

Today, the company managed by Carl Elsener Sr. and his son, Carl Elsener Jr, employs 1000 people and makes 25 million multi-tools per year, distributed in more than 100 countries. Whether in Museum of Modern Art in New York City or accompanying Everest expeditions or NASA missions, Victorinox multi-tools are everywhere.

1945 - The name “Swiss Army” was born from the immense popularity that the Victorinox Swiss Army Knife enjoyed with American GIs returning to the USA in 1945. As this popularity increased, so did the number and diversity of features and products.

Today, the Swiss Army brand is recognized by 90% of United States citizens and the Swiss Army watch (introduced in 1989) has become so popular that one out of every 5 Swiss-made timepieces exported to the USA has the famous Cross and Shield emblem, symbol of Victorinox.

This year also welcomes more sophisticated collections than ever - thanks to a devoted team of designers and the introduction of exquisite movements such as the Valgranges - dedicated to the connoisseur of fine mechanical timepieces.

And as an ultimate accomplishment, VSA launches an extraordinary Limited Edition collection featuring an unique timepiece in platinum and rubber case design. Discover the Legacy collection and the true craftmanship of Victorinox Swiss Army.

2007 - The Victorinox Swiss Army brand positioning – practical luxury inspired by the heritage and ingenuity of the Swiss Army knife – was brought to life in a new booth for BaselWorld 2007.

Assigned with the task to deliver this brand message, the design team was also guided by strong architectural concepts: Switzerland’s close association with nature, clean graphic design, and Swiss craftsmanship and engineering.