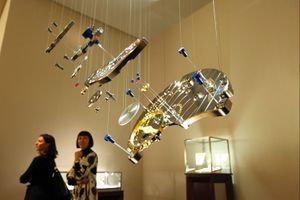 With an exceptional exhibition at the SIHH from 19 to 23 January A. Lange & Söhne presented the artistic aspects of fine watchmaking.

Looking over the shoulders of A. Lange & Söhne’s master watchmakers, it is easy to see how closely related art and horological artistry actually are. With infinite dedication, they decorate and assemble even the most complex mechanical movements by hand. Every single part is finished, polished, or engraved. It is a tradition of the brand to assure not only the flawless function of a movement but also its immaculate beauty. In brief: Saxon precision watchmaking is inconceivable without art. 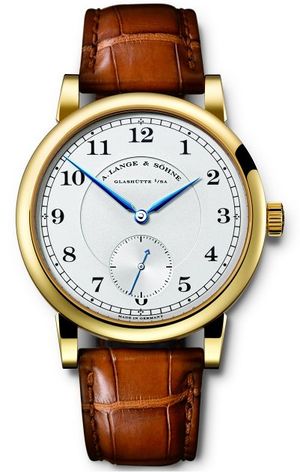 An exceptional exhibition at the A. Lange & Söhne stand at this year’s Geneva Watch Fair SIHH emphasised the artistic aspects of Lange’s horological expertise by presenting the work of the Saxon masters within the expressive context of art. Various exhibits, ranging from sculptures and paintings to video installations, offered a broad spectrum of interpretations of what has constituted the very essence of A. Lange & Söhne for four generations: the ultimate in technical prowess, the highest degree of skill in craftsmanship, a passion for mechanical time-keeping instruments, and the commitment to further enhance the perfection of every new movement.

At the centre of the exhibition the “Exploded-View Time“, an installation composed of movement parts that seemed to hover in mid-air, showcased the traditional elements of Lange’s precision watchmaking prowess. It was presented 25 times enlarged using the movement of the new 1815 model as a stage. The installation itself is a marvel of manufacturing. New approaches had to be developed for every facet of the exhibit, from materials to surface finishing techniques and the true-to-scale reproduction of the decorations. The largest component, the three-quarter plate, consists of a brass core that was sealed with nickel. The engravings were lined with gold leaf. The plate alone weighs nearly 100 kilograms.

The installation “David vs. Goliath” showed the drive train of a racing cycle with chain and cassette and its sibling in the movement of the RICHARD LANGE “Pour le Mérite”: the fusée-and-chain transmission. The two drive mechanisms both function according to the same principle of physics, except that here, it is portrayed in two totally different magnitudes.

In 1930, Richard Lange revolutionised precision watchmaking with his patented “Metal Alloy for Watch Springs”, because the hairsprings that have been made of this material since then greatly improved the accuracy of timepieces. His invention continues to beat in numerous high-quality mechanical watches. To this very day, many a mechanical timepiece thus still bears Richard Lange’s mark. It was symbolically portrayed in the micro-installation “Richard Lange’s Fingerprint” made of the same material as the Lange hairspring.

The exhibits will be presented at many events of the brand throughout the year.