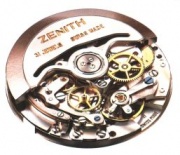 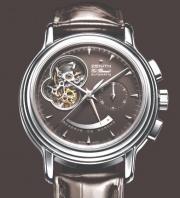 To cultivate beauty and total precision, with audacity.For almost one and a half centuries ZENITH has sculpted time, seeking the ultimate perfection.

In 1865, under the guidance of Georges Favre-Jacot, one of the most mythical manufacturers of quality watches was born. A 22-year old visionary, he was the first to create the very concept of a watchmaking Manufacture. He brought all artisan watchmakers together under one roof, providing them with heat and light, allowing them thus to dedicate themselves entirely to the design of their timepieces. From the hand of the watchmaker, “manus” in Latin, came the etymology of the word “Manufacture”.

One evening, Georges Favre-Jacot perfected a movement which he considered almost perfection. He went out into the silver night and lifted his eyes towards the heavenly sky. And the cosmos spoke to him. He saw a gigantic constellation turning around the Pole star, similar in its complexity to the movements of the pivots and the wheels on their axes. He decided then to call his new movement, and its Manufacture, after the word that designates the highest point in the universe, ZENITH. He adopted the star as a symbol, a shining good luck charm, a celestial guide towards a promising destiny.

From then on, protected by this radiance, the Manufacture with its 2000 golden hands, traversed the 20th century with style. 1565 awards, over 50 mythical calibres, branches throughout the world, from New York to Paris, from Moscow to Tokyo. History is in the making, led by exceptional men and women, who conscious of the treasure they hold in their hands, develop it with love, while keeping true to the founding values: beauty, truth, integrity, precision, and mastery over complexity. Furthermore, not content to simply perpetuate tradition, they reinvent it.

Today, the Manufacture continues to meet its challenge: to combine beauty and mechanical perfection, subtly uniting tradition with modernity. In the heavens, the ZENITH star continues to shine, as if Georges Favre-Jacot, from a panoramic vantage point, continues to look after his heritage, observing the work of his successors.