The TOURBOGRAPH “Pour le Mérite” from the anniversary collection
Reference 712.050 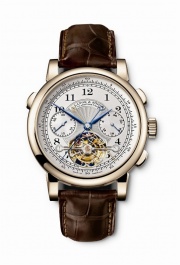 The TOURBOGRAPH „Pour le Mérite“ in a case made of the new, harder gold. 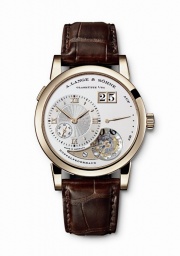 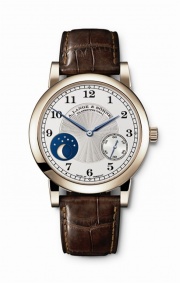 With a special collection of exceptional complications, A. Lange & Söhne commemorates the spiritual legacy of the founder of Germany’s precision watchmaking industry. Presented in a novel gold alloy of hitherto unmatched hardness, the trilogy consisting of the TOURBOGRAPH “Pour le Mérite”, the LANGE 1 TOURBILLON, and the 1815 MOONPHASE manifests the horological heritage of Ferdinand Adolph Lange enriched with contemporary ingenuity and artisanal virtuosity.

It was in 1845 when Ferdinand Adolph Lange moved from the splendour of palatial Dresden to the remote and impoverished mining town of Glashütte to make his dream of the ideal watch manufactory come true. He did it with the intention of crafting the world’s finest timepieces. Aware of the fact that today’s innovation is tomorrow’s standard, he evolved to become a staunch reformist to whom precision watchmaking owes numerous inventions and enhancements. For instance, he was among the first members of his guild to adopt metric units of measurement and abandon the then prevalent but complicated Parisian ligne system. His work was characterised by the quest for supreme precision. The drafts for mechanisms of his own design, even the most complicated ones, were exemplary as regards clarity of engineering and layout. His values remain the benchmark that inspires the work of all Lange employees.

The “165 Years – Homage to F.A. Lange” anniversary collection pays tribute to the founder of Germany’s precision watchmaking industry and to the trailblazing creations devised in his manufactory: they are what kept the legend alive for four generations of the watchmaking dynasty in the first place. One of them is the Grand Complication with the serial number 42500, initiated by Emil Lange, the second son of the founder. Made in 1902, its Louis XVI case in 18-carat gold accommodates a chiming mechanism with a grand strike and a small strike, a minute repeater, a split-seconds chronograph with a minute counter and flying seconds, as well as a perpetual calendar with a moon-phase display. This one-of-a-kind watch, exceptional in every respect, was sent to Lange in a seriously corroded condition. Many of the 833 parts had to be painstakingly refashioned by specialists in the restoration workshop. But after several years of meticulous repair work, all components of the complicated mechanism work again – as perfectly as more than a hundred years ago.

With three impressive timekeeping instruments that give a new face to the enduring watchmaking tradition of the Lange family as regards technical and aesthetic perfection, Lange’s 21st-century watchmakers salute the spiritual legacy of their great mentor. The capabilities of the manufactory are expressed by all three models with a novel case metal developed exclusively for Lange. With a Vickers hardness of over 300, the 18-carat honey-coloured gold exclusively developed for Lange is about twice as hard as other gold alloys. Breathing beneath the hand-engraved balance cock made of the same material is a balance spring developed and manufactured in-house. It symbolises the innovative energy with which every Lange watch is endowed. A guilloched solidgold dial and a sunburst finish on the three-quarter plate of the 1815 MOONPHASE and the crown wheel cock of the LANGE 1 TOURBILLON allude to the proud ancestral artisanship of the family tradition. A look at all three watches together – and at the concepts they embody – reaffirms Lange’s axiomatic claim “state-of-the-art tradition”. It lives in the Lange pocket watches of old as fervently as in the oeuvres crafted by today’s master watchmakers.

An escalation of superlatives: the TOURBOGRAPH “Pour le Mérite”

In 2005, A. Lange & Söhne presented a grand complication that established a new benchmark in precision watchmaking: the TOURBOGRAPH “Pour le Mérite”. It was the first one-minute tourbillon in a wristwatch format with a fusée-and-chain transmission as well as an additional rattrapante chronograph. Because of the complexity of the mechanism, it was possible to craft only one watch per month, so the last timepiece of the first partial edition of 51 platinum models was only just delivered a few weeks ago. The coming of a second partial edition of 50 watches in a yet-to-be-defined gold version was announced on the occasion of the original debut. The TOURBOGRAPH “Pour le Mérite” which is now being presented in honour of Ferdinand Adolph Lange also has a case made of the new, harder gold. And it, too, embodies Lange’s ambition to build the world’s finest watches. At the same time, it proves that even a horological superlative can be taken to a new, higher level.

At the turn of the millennium, A. Lange & Söhne presented the LANGE 1 TOURBILLON based on the legendary LANGE 1. At that time, it was not yet possible to achieve what Lange’s calibre engineers accomplished a few years later with the CABARET TOURBILLON: to directly and instantaneously stop the balance inside the rotating tourbillon cage. With this feat, they corrected an intrinsic flaw of the tourbillon mechanism that for two hundred years was considered to be the ne plus ultra of horological sophistication. While the elaborate device elevated the rate accuracy of a watch by overcoming the effects of gravity, it could not be stopped, so the watch could not be set to the second. Lange’s ingenious solution to the problem – the patented stop-seconds mechanism – is now integrated in the LANGE 1 TOURBILLON of the anniversary collection as well. It expresses Lange’s long-standing principle of questioning the validity of even what is already considered perfect.

The crowning conclusion of this rare opus is a mirror-polished bar made of honeycoloured gold that is precisely embedded in the dial and carries the tourbillon cage on the dial side. A further special feature of this watch is the fact that the one-minute tourbillon is suspended between diamond endstones on both sides. A hallmark that Ferdinand Adolph Lange once introduced to sign the 1A quality category of his pocket watches.

A thousand years of precision: the 1815 MOONPHASE in a new garb

The 1815 MOONPHASE epitomises Lange’s unending quest for the ultimate in precision. No effort was spared to calculate an extremely accurate moon-phase train for this watch. Thanks to a suite of wheels with special transmission ratios, its error per lunar month is a nearly infinitesimal 6.61 seconds. It takes 1,058 years for this error to add up to a deviation of one day relative to the actual lunar cycle. Had such a timepiece existed in the year 952 – during the lifetime of Otto I the Great – and had it run without interruption since then, its moon-phase display would have to be corrected for the first time this year.

Among collectors, the 1999 limited edition pieces of the 1815 MOONPHASE in pink gold and platinum with a black dial rank among the most sought-after Lange timepieces. Their hallmark is an artistic rendering of the “Big Dipper”, probably the best-known constellation, on the dial. At watch auctions, well-maintained exemplars of this coveted treasure sometimes fetch more than three times the original price. The value of the 1815 MOONPHASE “Homage to F. A. Lange” could follow a similar trend: its edition is limited to 265 watches world-wide.