A. Lange & Söhne - The enlightenment of the outsize date 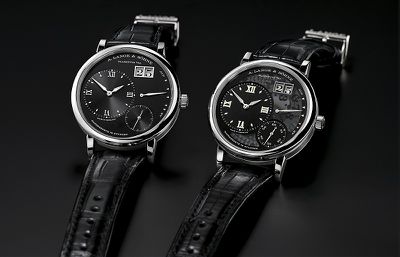 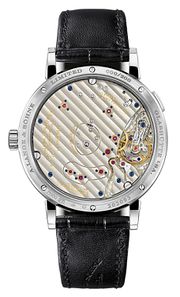 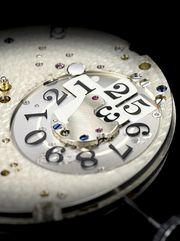 When it was first presented, it evoked excitement and kicked off a trend that soon found many imitators: the Lange outsize date. Together with the asymmetric dial, it elevated the LANGE 1 to the status of an icon of classic design. However, the secret behind the complex mechanism responsible for this unprecedented date display format remained hidden beneath the solid-silver dial.

Now, the GRAND LANGE 1 with the Latin attribute “Lumen” reveals this secret. The name of the timepiece, which comes in a limited edition of 200 watches in platinum cases, says it all. Parts of its dial consist of semi-transparent sapphire crystal. Only the outer ring and the surfaces of the displays for hours and minutes as well as small seconds are made of blackened silver. The sapphire crystal surfaces reveal the disc mechanism of the first outsize date that glows in the dark. Additionally, the time and the power reserve are also legible in the dark.

The technical challenge encountered during the development of the GRAND LANGE 1 “Lumen” was to ensure maximum luminosity for the date display, even immediately after the daily switching operation. Lange’s product developers solved this issue in an exceptional way. While the tens cross was coated with a white luminous compound and subsequently imprinted with black numerals, the units disc consists of transparent glass imprinted with black numerals and rotates before a luminous background.

The sapphire crystal sections of the dial are treated with a special coating that blocks most of the visible spectrum of light. For the invisible UV light spectrum, however, the coating does not represent a barrier. Therefore, UV radiation can pass through to the luminous surfaces of the outsize date unhindered. This produces an interesting side effect: the date platform with its manually applied perlage, normally seen only by the watchmaker during the assembly process, is now visible to the owner as well. The small, overlapping circular graining produced by hand using a rotating abrasive peg is normally concealed underneath the dial.

The craftsmanship and virtuosity invested in the L095.2 manufacture movement, which is assembled twice, can also be admired from the other side through the sapphire-crystal caseback. Indeed, the GRAND LANGE 1 “Lumen” radiates charisma from every angle.

Only last year, A. Lange & Söhne endowed the GRAND LANGE 1 with a totally new, manually wound calibre. The omission of the second mainspring barrel as well as the effective arrangement of the parts reduced the overall height of the calibre without any compromise in terms of power reserve, making it possible to transpose the graceful dial architecture of the LANGE 1 to the enlarged model. The dial of the GRAND LANGE 1 The enlightenment of the outsize date, page 3 “Lumen” presents the indications of the hours, minutes, seconds, outsize date, and power reserve without any overlaps.


This is how the Lange outsize date works

About A. Lange & Söhne

When Ferdinand A. Lange, a Dresden watchmaker, established his watch manufactory in 1845, he laid the cornerstone of Saxony’s precision watchmaking. His precious pocket watches remain highly coveted among collectors all over the world. The company was expropriated after World War II, and the name A. Lange & Söhne nearly fell into oblivion. In 1990, Ferdinand A. Lange’s great-grandson Walter Lange had the courage to relaunch the brand. Today, Lange crafts only a few thousand wristwatches in gold or platinum per year. They are endowed exclusively with proprietary movements that are lavishly decorated and assembled by hand. In a period of little more than 20 years, A. Lange & Söhne developed over 40 manufacture calibres and secured a top-tier position among the world’s finest watch brands. Its greatest successes include innovative time-keeping instruments such as the LANGE 1 with the first outsize date in a series produced wristwatch as well as the LANGE ZEITWERK with its supremely legible, precisely jumping numerals. Meanwhile, both models have become icons of a brand rich in tradition.