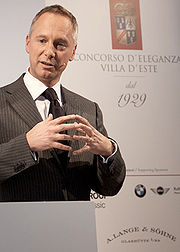 Lange CEO Wilhelm Schmid explains the reasons that motivated the company’s commitment to the event. 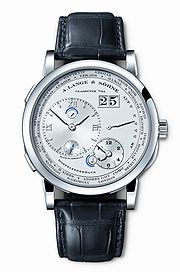 For the first time, the Saxon watch brand A. Lange & Söhne is to sponsor the Concorso d’Eleganza Villa d’Este, a worldwide beauty contest for classic automobiles, to take place from 25 to 27 May 2012 in Cernobbio on the shores of Lake Como. The Concorso d’Eleganza is considered to be the most traditional and elegant competition of its kind.

Founded in 1929, the event has evolved since its revival in the 1990s to become the most important event for connoisseurs of high-quality historic cars. Besides the classics, prototypes of new vehicles are also awarded prizes, with a particular focus on design and elegance. Besides the aesthetic criteria, the historical significance of the vehicles also plays a major role in the evaluation process. Bordering Lake Como, the Villa d’Este luxury hotel is the exclusive setting for the event. The winner of the “Best of Show” category – the most important prize of the contest – will be presented with a one-of-a-kind cuvette edition of the LANGE 1 TIME ZONE. The dust cover of the hunter-cased watch has been adorned with an engraving designed specially for the occasion. The Central European Time (CET) zone is represented by the town of Como on the city ring around this time-zone watch.

Lange CEO Wilhelm Schmid explains the reasons that motivated the company’s commitment to the event as follows: “The Concorso d’Eleganza Villa d’Este is a chance to experience passion for art and elegance at its best. It is exactly the same fascination that our timepieces hold for collectors and connoisseurs. We want to use this unique setting to share our passion for style and elegance with our customers and friends.” The President of the Concorso d’Eleganza Villa d’Este and Director of BMW Group Classic, Karl Baumer, sees the commitment as an important contribution to the future development of the sophisticated event: “A. Lange & Söhne is a brand seen internationally as the epitome of elegant design, technical creativity and exquisite craftsmanship. With this company, we have a partner on our side that clearly draws on tradition in order to shape the future.”

A. Lange & Söhne dates back to the initiative of the Dresden watchmaker Ferdinand A. Lange, who, in opening his watchmaking manufactory in 1845, laid the foundation for fine watchmaking in Saxony. His high-quality pocket watches are highly coveted collectors’ items all over the world. Nowadays, the annual production is limited to just a few thousand wristwatches in gold or platinum. They are fitted exclusively with movements developed and manufactured in-house, sumptuously decorated and assembled by hand. With more than 40 manufacture calibres in little more than 20 years, A. Lange & Söhne has reached a leading position among the world’s best watch brands. Their biggest successes include innovative timepieces such as the LANGE 1, the first seriesproduction wristwatch to feature an outsize date and the LANGE ZEITWERK with its precisely jumping numeral display of unmatched clarity – watches that have become icons of the traditional brand.