Under the Hammer: The DATOGRAPH PERPETUAL in the Test Lab 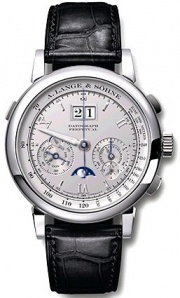 Under the Hammer: The DATOGRAPH PERPETUAL in the Test Lab You may expect a watch made by A. Lange & Söhne to live longer than its owner. Therefore, all new models are subjected to one of the most extensive tests in the watchmaking industry. Even the most complex ones, such as the DATOGRAPH PERPETUAL.

Any true watch aficionado would like to lock this model away in a safe and wear gloves to take it out: A DATOGRAPH PERPETUAL by A. Lange & Söhne. With the ingenious combination of a flyback chronograph and perpetual calendar, it is a watch made for the moment and for eternity and one of the most complex calibres made since the reestablishment of the traditional Saxon manufactory 18 years ago.

Since Christoph Schlencker has been responsible for A. Lange & Söhne’s testing lab, there has not been a single problem for which he didn’t find a solution eventually.
Christoph Schlencker, on the other hand, doesn’t even remove it from his wrist when he digs up his garden or lays out the flooring in his living room. It is his job to find out how much abuse this watch is able to withstand, how sturdy and stable its individual components are and how well the watch maintains its precision when you do something with it that you really shouldn’t. For example: Letting the DATOGRAPH PERPETUAL fall from a height of one metre. This is the purpose of the hammer test; the watch is subjected to a standardized hammer blow that is the exact equivalent of a fall from a height of one metre onto a hard wooden floor. In the course of the test, the parts must withstand sudden stress equivalent to 5,000 times their own weight. In other words: For a split second, a watch part weighing one gram will have a “weight” of five kilograms – and needs to hold up to it.

It is Schlencker’s goal to make sure that the DATOGRAPH PERPETUAL remains in perfect working order even after such abuse. When it comes to sturdiness and reliability, every A. Lange & Söhne watch must meet the same requirements. He is looking for ways to improve the construction and materials or to streamline the manufacturing process. He is the head of the test lab. It is one of the most important positions at A. Lange & Söhne. It is not, however, one of the most popular. A part of Schlencker’s job is to make his colleagues’ lives as difficult as humanly possible. Whatever the designers think up and the prototype engineers put together, he will do his best to destroy it. He looks for the weak spots of every design. All new ideas must pass his critical muster. Not a single watch design goes into production without being tested by him.

Schlencker established the laboratory eight years ago. When the manufacture was looking to fill the position, the trained watchmaker seized his chance right away. It was the job he had been waiting for all his life. For Lange, it was about establishing the strictest quality controls in the entire fine watchmaking industry. A crash test laboratory was to be created according to the example of the automotive industry, which would also be a place where technical treasures would receive their ultimate fine-tuning. Basically, the test lab should not be a place of destruction, but one of research. Schlencker was able to buy some of the necessary equipment and developed the other tests himself. The “shaker test”, for example. Essentially, it is a simple wooden box rotating in all possible directions, back and forth, diagonally and with loops, and all this at an irregular speed. Inside, a watch bangs against the wall four times per second, and after 24 hours, the piece looks as if its wearer had just climbed the Nanga Parbat. “The shaker simulates five years of mechanical stress caused by an athletic wearer,“ Schlencker says. Following this ordeal, all 556 parts of the DATOGRAPH PERPETUAL still have to be firmly in place and work flawlessly.

Then he developed a “pusher tester“, which he modified to test the watch’s long-term stability with a realistic simulation. From a distance, it looks like a huge spider. On closer view, it consists of many little bolts pressing the pushers of the DATOGRAPH PERPETUAL again and again;

The button tester presses each button 50,000 times. Spring-mounted metal bolts with silicone caps simulate human fingers, because a precise bolt would put less stress on the mechanism than elastic skin.
after 50,000 times each on start, stop, reset and flyback, the buttons must work as precisely and with the same resistance as they did on the first day. The main push piece, which advances all calendar displays, including the outsize date, collectively by one day, is also pushed 50,000 times during the development stage, advancing the watch more than a hundred years. This is the only way to ensure that the perpetual calendar will actually work in perpetuity. The problem with this machine is, however, that the stress caused by finger pressure is much greater than that of a bolt, because a finger builds up the force slowly until it overcomes the resistance of the button, then pushing the button against the base with a lot of excess energy. Schlencker simulated this by mounting the bolts on springs and placing silicone caps on the ends. In addition, he created a device that can wind up the movement automatically during the tests, so that he doesn’t have to interrupt the torture on weekends.

Schlencker also procured a climatic chamber that is able to replicate all climatic zones around the world from minus 20 degrees of dry cold to 80 degrees of humid heat. It tests the temperature resistance of the movement. Schlencker also bought a “torque testing machine” to measure the power reaching a gearwheel and the percentage of power used by the wheel itself. The less energy lost, the better it is for the durability of a movement. For a well-adjusted wheel, the power efficiency is estimated at 93 percent. The rest is lost to friction and power consumption. And every percent of lost efficiency shortens the lifespan considerably. He can observe the consequences with a high frequency camera that is able to take 10,000 images per second and show the details of even the fastest motions. Errors not detectable by the naked eye, such as the inertia-related overshoot of dynamically accelerated and abruptly braked parts – such as the outsize date – or a mechanical conflict between two parts, can be revealed and remedied with this method. It is an indispensible diagnostic device that was an essential part of the development of the precisely jumping minute counter in the DATOGRAPH PERPETUAL.

Still, Schlencker wasn’t entirely satisfied. It was his vision to be able to examine individual assembly groups within a watch, before the respective watch even existed. The problem with watch construction is that design-based irregularities during operation can be recognized only when the entire watch is finished. The interaction of spring and balance in particular always proves to be problematic. For this reason, Schlencker looked for a method to coordinate the two components exactly. Without interference from the rest of the going train. This necessitated a device capable of measuring the number of oscillations of a balance spring per minute and the movement in both directions, because the amplitude would show the force behind the oscillations.

The laser of the balance spring analyzer scans the balance, measuring the frequency and amplitude of the oscillation. With this method, balance and spring can be adjusted to perfection during the construction phase. That in turn is one of the reasons for the precision of the new movement, which is unequalled in modern fine watchmaking.
Schlencker needed a laser beam that scans an oscillating balance permanently, counting the frequency and measuring the amplitude in any conceivable position, in order to simulate the different influences of gravity. In addition, he needed software that would calculate and turn this data into graphic curves. It took three years to develop the device for Lange that is now officially called the “balance spring analyzer”. It was a true milestone. The analyzer was used for the development of the DATOGRAPH PERPETUAL. For this watch, the Lange design engineers developed a balance spring that was optimized for this type of watch, could be produced in-house and would ensure a perfectly stable movement. With the help of the balance spring analyzer, different prototype models were adjusted to the balance, until the result was flawless. The tests were then repeated with the finished watch. All that hard work paid off. The average deviation of the DATOGRAPH PERPETUAL was between 0.5 and 2 seconds per day. A value under 6 seconds is generally considered to be very precise.

In terms of corporate organization, the test lab is a part of Product Development. It employs the best watchmakers in the country. People who love problems and possess a strong sense of logic and understanding of physics, with extensive knowledge about all the watches of the manufacture. And they must be able to endure something that causes every passionate watchmaker physical pain: Hitting a 100,000 euro watch with a hammer.