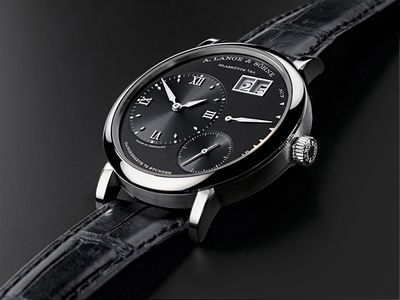 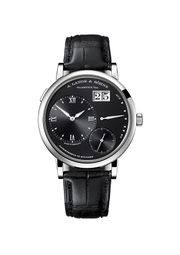 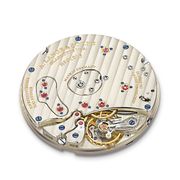 Among artists, designers, and avantgardists, black is considered to be an expression of timeless elegance and creativity. It is a colour that radiates distinction and sophistication. So does the new GRAND LANGE 1, with its black solid-silver dial as well as luminous hands and appliques.

With unique assets such as the off-centre dial configuration, the outsize date, the three-day movement, and the flawless craftsmanship of its manufacture calibre, the LANGE 1 triggered a fresh breeze in the realm of precision watchmaking when it was launched 18 years ago. Since then, it has been the face of A. Lange & Söhne. Featuring a more slender silhouette and a totally new manufacture calibre, the GRAND LANGE 1 became an icon in its own right last year. For this model, Lange’s developers succeeded in preserving the 72-hour power reserve of the LANGE 1, but this time with a single mainspring barrel. This decision reduced the vertical space occupied by the movement. The characteristic dial architecture of the LANGE 1 was proportionally transposed to the larger model.

With its white-gold case and black dial, the new model variation of the GRAND LANGE 1 projects a striking personality. Thanks to luminous hands and appliques in rhodiumed gold, the time and the power reserve are highly legible even in the dark. The charismatic elegance of the new LANGE 1 family member is underscored with a black crocodile strap and a Lange prong buckle in solid white gold.

The manufacture calibre L095.1 features a classic screw balance, a balance spring developed and produced in-house, the brand-typical movement architecture with a three-quarter plate made of untreated German silver and lavishly hand-decorated movement components. It is endowed with all of the characteristics that have made timepieces by A. Lange & Söhne synonymous with the apex of Saxon watchmaking artistry among connoisseurs all over the world – and timeless classics for the wrist.

About A. Lange & Söhne

When Ferdinand A. Lange, a Dresden watchmaker, established his watch manufactory in 1845, he laid the cornerstone of Saxony’s precision watchmaking. His precious pocket watches remain highly coveted among collectors all over the world. The company was expropriated after World War II, and the name A. Lange & Söhne nearly fell into oblivion. In 1990, Ferdinand A. Lange’s great-grandson Walter Lange had the courage to relaunch the brand. Today, Lange crafts only a few thousand wristwatches in gold or platinum per year. They are endowed exclusively with proprietary movements that are lavishly decorated and assembled by hand. In a period of little more than 20 years, A. Lange & Söhne developed over 40 manufacture calibres and secured a top-tier position among the world’s finest watch brands. Its greatest successes include innovative time-keeping instruments such as the LANGE 1 with the first outsize date in a series produced wristwatch as well as the LANGE ZEITWERK with its supremely legible, precisely jumping numerals. Meanwhile, both models have become icons of a brand rich in tradition.