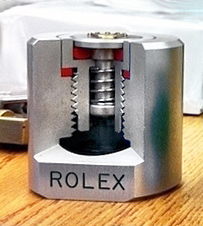 The Helium valve is a safety valve that allows helium to escape from the case of a divers’ watch during decompression. It is patented by Rolex in 1967, it was instrumental in unlocking new depths in underwater exploration. Without it, professional saturation divers in hyperbaric chambers would see the crystal of their watch pop from its case due to pressure build-up. First featured on the original Rolex Sea-Dweller, the standard issue for deep-sea divers around the world. It is available today on the Rolex Deepsea and Sea-Dweller 4000 models. Designed for professional use in the most extreme conditions.

In habitats at overpressure, which are filled with breathing mixes composed largely of helium, the watches behave in a similar manner to the divers’ bodies. The inner part of the watch case becomes saturated with helium as the pressure inside the watch case equalizes with that inside the chamber. Due to the extreme volatility of this light gas, which has the smallest molecules on Earth, the helium gradually penetrates the watch through the gaskets. During the decompression phase, helium is eliminated from human tissue at a faster rate than it can escape from a waterproof watch, with the result that pressure effectively builds up inside the watch case. Divers often observed during decompression that the watch crystal could pop out like a champagne cork from a bottle, due to this internal pressure. The watch must also be able to eliminate the excess helium inside the case.

Instead of attempting to make the watch impervious to helium, a practically impossible task, Rolex developed a unidirectional valve on the side of the watch case. It is activated automatically above a certain level of internal pressure to allow the gas to escape from the case, without affecting the waterproofness of the watch. Patented in 1967 by Rolex for its new professional divers’ model, the Oyster Perpetual Sea‑Dweller, the helium valve proved invaluable to the rise of deep-sea saturation diving. Comex swiftly adopted the Sea-Dweller as its official watch, as its divers continued to push ever further the limits for manned deep dives. The open-sea record of 534 metres set in 1988 was followed by another record in 1992 at an experimental depth of 701 metres in a hyperbaric chamber, with a 24-day decompression period – a record which still stands today. [1]