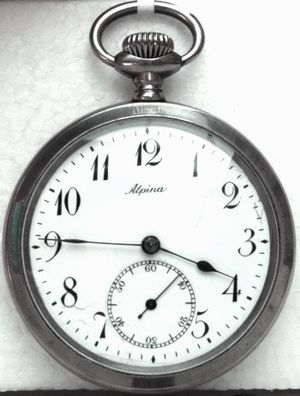 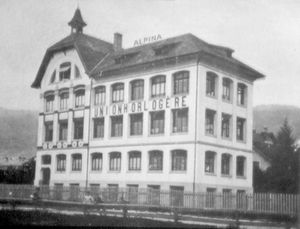 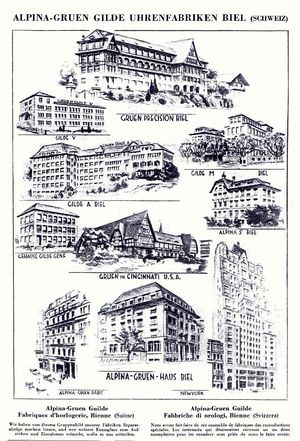 Alpina Watches International SA is a manufacturer of wrist watches based in Plan-les-Ouates, Geneva, Switzerland.

Alpina is an independent watch manufacturer based in Plan-les-Ouates, Genève. Alpina is the story of a team of watch experts who share one passion: to produce creative and innovative timepieces of top quality.

On the first floor of its ultra modern manufacture, dedicated watchmakers working in a dust and particle-free environment assemble and control each and every calibre and watch by hand. The innovative and constantly evolving design of its watches and movements is entrusted to engineers and designers who work with cutting-edge computer software (CAD) and state-of-the-art CNC machines.

The development of new proprietary watch movements such as the AL-950 Automatic Manufacture Regulator is a priority for the company, which is involved in all stages of its watch production, from the initial design to final assembly and quality control. Alpina watches are Swiss Made, an important seal for quality timepieces.

Furthermore, all Alpina watches are made in Genève, the most prestigious region for Swiss watch making. For a watch to bear the “Genève” dial signature, 50% of its value must be added in the Canton of Geneva.

Everything started in 1883, when Gottlieb Hauser, a watchmaker in Winterthur, founded the Swiss Watchmakers Corporation (“Corporation d’Horlogers Suisses”) to purchase watch components and organize their manufacturing. The concept was an immediate success, and soon, the Association started developing and producing its own calibres. Representations were set up in Germany as well as Eastern and Northern Europe. In 1901, the name "Alpina" was registered as a trademark. From the beginning, it was decided that the Alpina Brand would only appear on the dials of high-end watches. A leap in time takes us to 1938, when Alpina unveiled the Alpina 4. The number “4” stood for four important quality criteria that were united in these watches: anti-magnetism, water-resistance, the incorporation of an Incabloc anti-shock system and a tough stainless steel case. The “Alpina 4” was also equipped with one of the sturdiest watch engines of its generation, the hand-wound Alpina 592 calibre, which continued to be used well into the 1950’s and 60’s. Retrospectively, it can be said that sports watches were the main focus and biggest success of Alpina. Growth was sustained until the seventies, when the quartz crisis violently shook up the Swiss watch industry. The overwhelming emergence of electronic watches left only little room for the brand, which continued as best as it could to bring together the remaining “Alpinists” and keep alive the spirit of the golden age of the venerable brand. In 2002, Alpina was sold to two passionate young watch entrepreneurs, Aletta and Peter Stas, co-founders of the Frédérique Constant. A new collection was presented at Baselworld 2003, setting the stage for the brand’s revival and comeback to the forefront of the watch making scene. January 2006 marked a new turning point in Alpina’s history, when the brand moved to its brand-new headquarters in Plan-les-Ouates, Genève. Today, after 125 years of existence, and to the delight of watch aficionados and collectors alike, Alpina is available again at over 200 select watch retailers throughout the world.

Members of the Union Horlogère

Except J. Straub & Co. were still following manufacturer member of the Union Horlogère